The need for a particular figure in the review paper that the ISSI team is writing on Main Belt Comets was for me the occasion to get back to my work on active Centaurs. I thought I’d say a word about that here… Centaurs are a population of icy bodies which are orbiting the Sun roughly between Jupiter and Neptune. Initially, they were stored in the transneptunian region, on excentric orbits that got them close to Neptune from time to time. Eventually, their orbits got destabilized by such close encounters, and they ended up on unstable orbits in the giant planet region. Ultimately, the fate of most Centaurs is to get ejected from the Solar System. The others will become Jupiter Family Comets (JFCs), like the notorious target of the Rosetta mission, 67P. Dynamical studies show that some JFCs can go back to the giant planet region, and this ping-pong “game” can be played for about a dozen time.

One interesting feature of the Centaur population is that about 10 to 20% of them are active, loosing mass like comets do. However, the driver for the typical comet activity is sublimation, especially sublimation of water ice when comet nuclei get closer than 3 au of the Sun. In the giant planet region, water ice is thermodynamically stable: it does not sublimate, and cannot drive the activity of Centaurs. While trying to identify the source of Centaurs activity, Jewitt (2009) noticed that the physical and orbital properties of active Centaurs are such that their activity should be thermally driven, hence a phase transition like the crystallization of amorphous water ice, which releases trapped volatile molecules in the process, could actually fit the data. So back in 2012, I studied the survival of amorphous water ice in Centaurs, and how crystallization could contribute to their activity (article here). I performed the study so it would have a statistical significance, so no real Centaur is modeled here, but any real Centaur has its place in the tables and figures, as defined by their orbit (semi-major axis and eccentricity), albedo, and thermal characteristics. 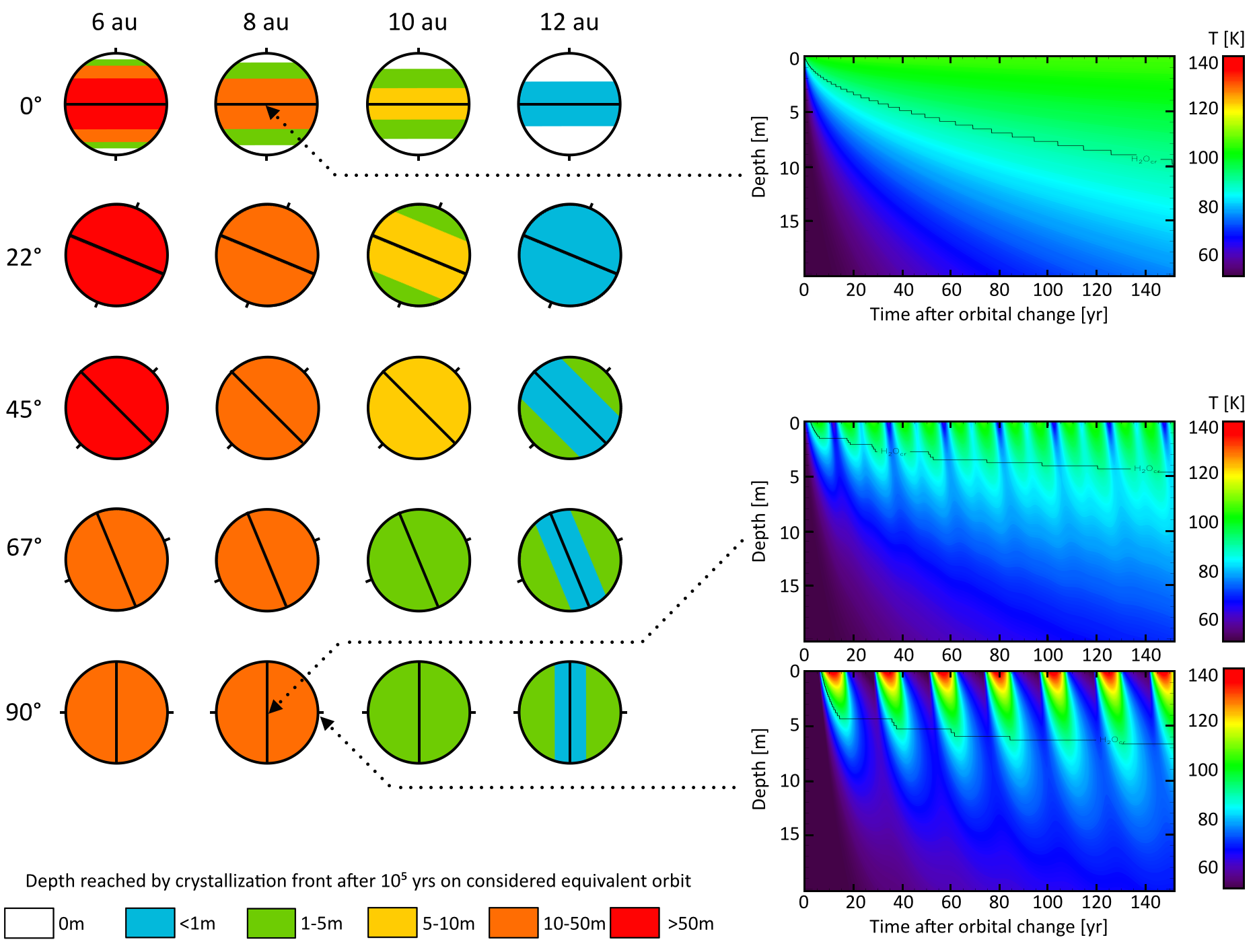 On the left, the figure shows the depths where the crystallisation front could have stopped for different orbital configurations (columns show the heliocentric distance, row correspond to various obliquities, i.e. the tilt of the spin axis with respect to the orbital plane), after 100,000 years of evolution in the giant planet region (typical for Centaurs). On the right, the figure shows how the heat wave and crystallisation front progress in the subsurface layer for three cases (at 8 au for all, and from top to bottom, under the equator at 0° obliquity, under the equator at 90° obliquity and under the pole at 90° obliquity), during the time the objects may be active (few hundred years at this distance, after an orbital change labelled time = 0). The black lines show the crystallisation fronts. From Snodgrass et al. (2017), adapted from Guilbert- Lepoutre (2012).

The main outputs of my study are the following:

For now, there hasn’t been any observation to contradict either Jewitt (2009) or Guilbert-Lepoutre (2012). The limitation, though, remains that amorphous water ice hasn’t been directly detected yet, so there is not direct confirmation of these studies either. I hope that future observations, perhaps with JWST, as well as the modeling of some new phase transitions, will help to shed lights on the origin of active Centaurs.