From Giotto to Rosetta. The 50th ESLAB symposium was focussed on 30 years of cometary science, triggered by these two impressive space missions. I’ve been invited to talk about the evolution of comets, a subject at the heart of debate in the community. This lead to a contribution in the MNRAS special issue “From Giotto to Rosetta”, written in collaboration with my colleagues from Israel. In this article, we review the most relevant studies, their results, and their implications for the study of 67P/Churyumov-Gerasimenko, the target of Rosetta.

The studies we have reviewed in the paper hold a strong statistical significance when it comes to interpreting the current results of the Rosetta mission, even if those studies were not designed to be applied to 67P in the first place. Indeed, using the current thermo-physical properties of 67P as initial parameters for studying its possible past processing would defeat the purpose of demonstrating that the physical processes responsible for such processing did actually shape the nucleus as observed today. Rather, the current thermo-physical parameters of 67P should be outputs of these models, and initial parameters should be derived by a trial and error procedure which would involve a significant and almost impossible work, given that the orbital evolution of 67P (hence the thermal processing linked to its orbital evolution) cannot be traced back accurately for more than hundreds of years. 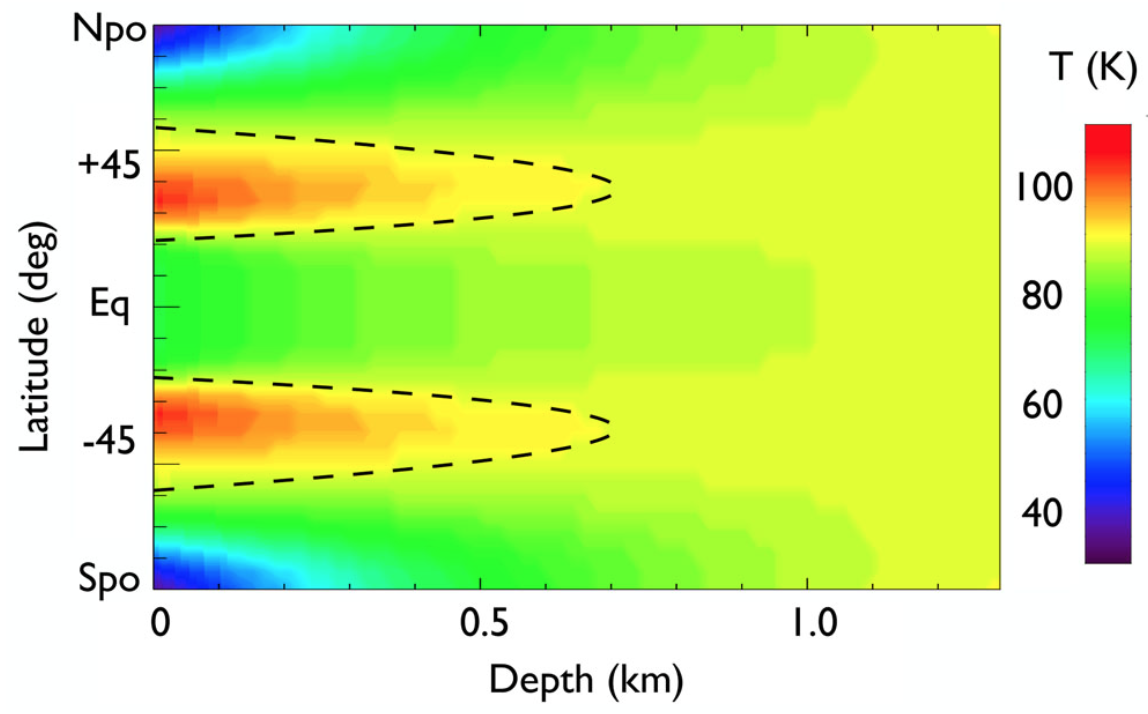 Temperature distribution along a meridian, for a comet with a non-uniform surface albedo. A non-uniform temperature distribution at the surface triggers the development of non-uniform internal compositions, since temperature-dependent phase transitions like sublimation or crystallization proceed at different rates in the subsurface. Lateral heat fluxes are very inefficient at erasing such heterogeneous structures: they are therefore long-lived. From Guilbert-Lepoutre et al. (2016), adapted from Guilbert-Lepoutre & Jewitt (2011). 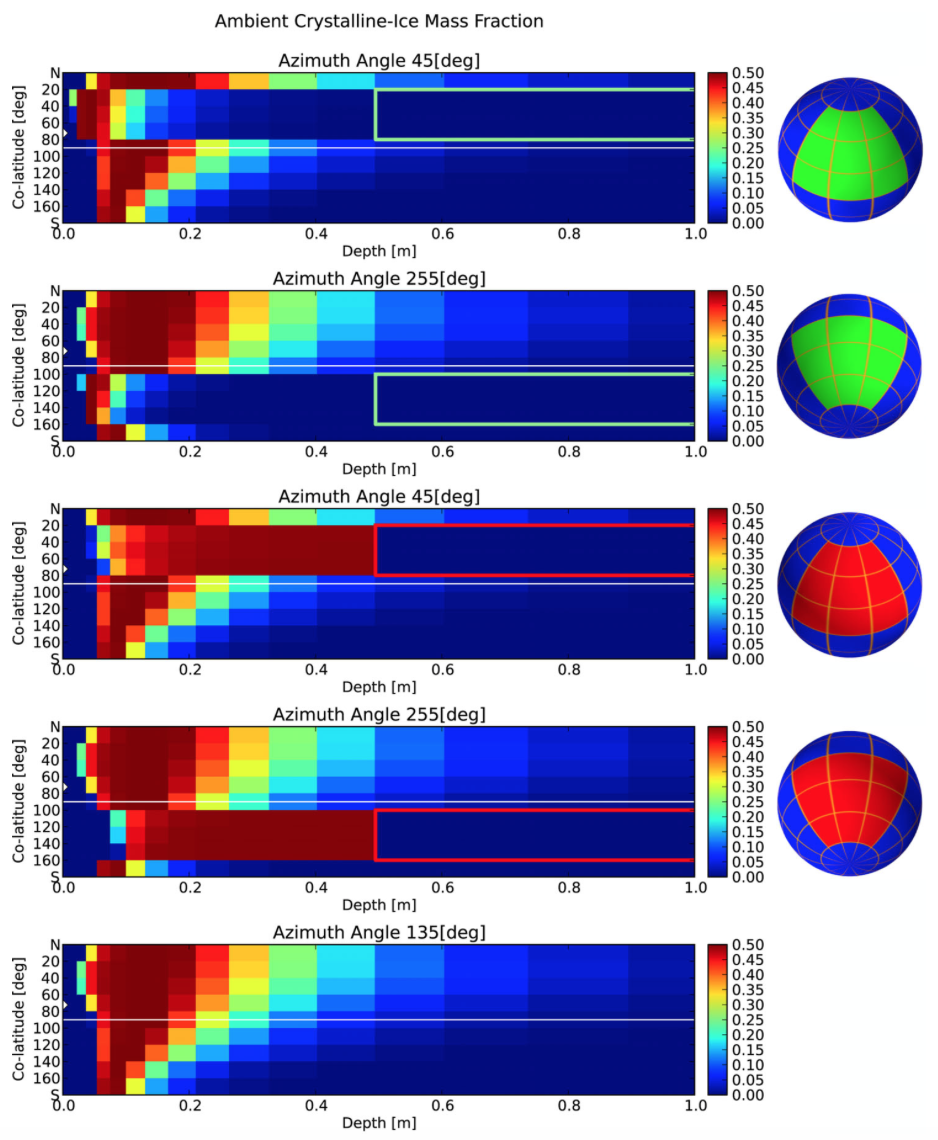 Mass fraction of crystalline ice as a function of depth, down to 1m (abscissa) and co-latitude (ordinate). Each panel represents a “slice” of the nucleus. The bottom panel is used as the homogeneous reference case. The red and green frames mark the location of patches: red – porous ice, green – compact dust. The position of each patch is illustrated on the right-hand side of each panel. From Guilbert-Lepoutre et al. (2016), adapted from Rosenberg & Prialnik (2010).

First, the article deals with how the long-term thermal processing of comets can lead to layered internal structures. This process – which I’ll call radial differentiation –  is probably the most accepted within the community, although the debate remains as to how significant (= how deep) the effects are… For this process, the actual orbital evolution does play a significant role, since the final stratigraphy does depend on how comet nuclei are injected into the inner solar system. And that is still a big unknown today. While the inner part of a comet nucleus may remain unaltered by early evolution, its outer layers are expected to be processed, perhaps to a significant degree. In a way, the outermost layers protect the deep ones, especially in the presence of a dust mantle, which is an efficient insulator.

We decided to also address the issue of lateral differentiation, studied by Guilbert-Lepoutre & Jewitt (2011). Intuitively, we indeed expect that phase transitions like sublimation or amorphous water ice crystallization (at the heart of cometary activity) would proceed at different rates inside the nucleus if the energy balance varies over the surface of a comet: this is illustrated by the figure on the left. Are these two processes effectively observed on 67P? Is the layering due to thermal processing? We wished to stress that far from claiming that evolution produced such heterogeneity, the inevitable past processing of the nucleus cannot be overlooked when interpreting the complex results of observations provided by Rosetta, especially since the properties of 67P’s subsurface on a smaller scale are consistent with thermal processing playing an active part in shaping the current nucleus characteristics.

Ultimately, we needed to address the effects on internal inhomogenetities on the activity of a comet, whether these inhomogeneities are primordial or due to evolution, as studied by Rosenberg & Prialnik (2011). To summarize, the main effect of an initially inhomogeneous configuration, where patches are randomly distributed throughout the outer part of the nucleus (see figure on the left), is a somewhat erratic activity, with outbursts at all heliocentric distances. They would affect water and other volatiles production rates, local erosion, the progression of crystallization, the dust mantle thickness, produce activity on the night side, a differentiation of dust grain size in the surface layer, and an uneven surface by differential erosion, creating mountains, depressions and terraces. One should keep in mind that simplified models such as described here, are not meant to reproduce the behaviour of a given comet, but rather help understand the general behaviour patterns of comet nuclei and the diversity of surface structures in itself. With that in mind, many arguments have been put forward already to suggest that the nucleus of 67P is heterogeneous: the outbursts observed by Rosetta, and some of the geological features, may thus be the consequence of such heterogeneities.

Finally, we addressed the issue raised by the presence of circular depressions at the surface of 67P. They offer the exciting prospect of looking into the internal structure and the thermo-physical processing of comet nuclei. We performed new calculations, and found that it is very unlikely that 100–200 m depressions were formed on 67P’s current orbit, since none of the known phase transitions is able to proceed sufficiently fast and deep to open a cavity that would then collapse, or to directly excavate the superficial layers. Therefore, the presence of circular depressions can be regarded as some evidence for the past processing of the nucleus. Since the results from the orbital evolution model indicate that the previous orbits would have been even less likely to produce these features (having perihelia distances further from the Sun than this current one), it may indeed be the case that circular depressions on 67P are the result of a long-term processing that still awaits to be understood. 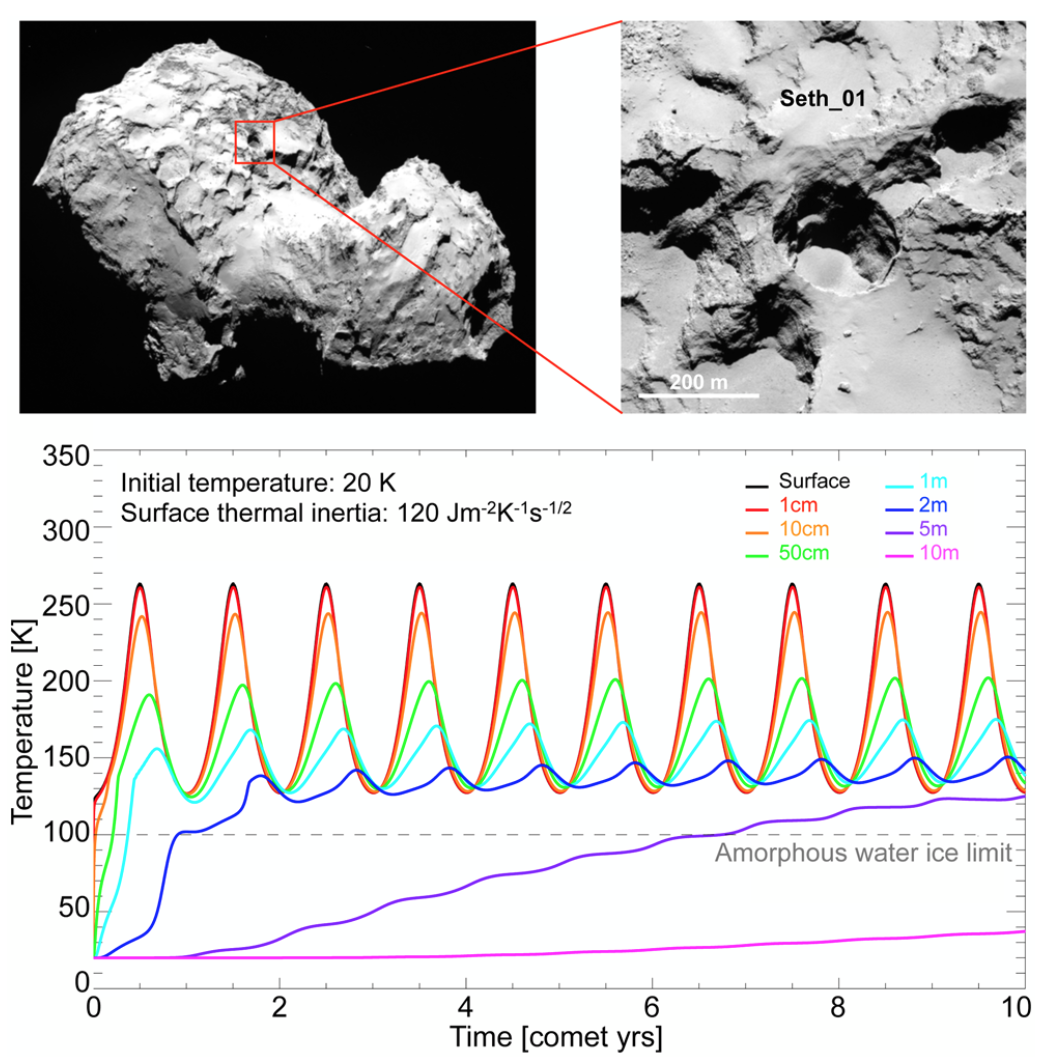 Bottom panel shows the evolution of the temperature at different depths for illumination conditions similar to those of the Seth_01 circular depression shown above. One comet year is 6.44 yr. From Guilbert-Lepoutre et al. (2016).